FoodClub is a Chandigarh based food delivery service founded by Abhinav Yadhav in the year 2018. The core aim of the FoodClub app was to make the dreams of foodies to ‘purchase food from multiple restaurants in a single order’ make real. As of today, the team FoodClub was able to capture the heart of 1000 of food lovers in Chandigarh alone at its initial stage.

In order to make the virtual food court come into reality, FoodClub has partnered with top restaurants within Chandigarh and has gathered exclusive crew members as delivery persons.

Already with the feature- ‘Multiple meals from multiple restaurants in a single order‘ makes FoodClub App stay out of the crowd, the app has far better features that are unique when compared to that of the existing food delivery system. In advance to the inception of the FoodClub project, Abhinav and his crew conducted a survey among the foodies and this has helped them understand and overcome the downsides in the existing food delivery system. One such feature is serving only the best. The FoodClub has conducted several polls and manual analysis to make sure that the FoodClub app users are served only the best food. Within the FoodClub app, you can see only the best

The OTP login that is implemented in the food delivery app allows the users to log in to the app in less than 20 seconds. For this, the user is asked to enter the phone number and after submitting, the secret OTP that has been generated is sent to the user which will be auto-detected and thereby letting the user begin the food ordering process.

The app has made sure not to force users to login. For this, the users are allowed to skip the login and directly go into the home in-app page. 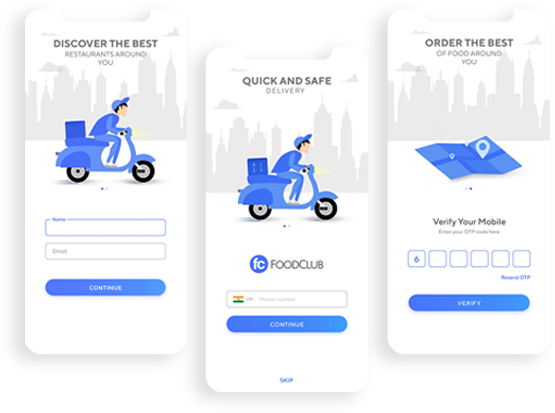 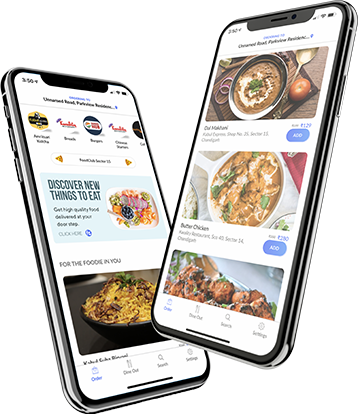 The user lands in the home In-page of the FoodClub app once the login is validated. To enhance the food ordering experience, the app displays only the best cuisines from the best restaurants.

With access to the user’s location, the app displays the nearby top restaurants and food courts from which the users can make the purchase.

In the landing In-app page, the users can also choose the type of cuisine that is of their interest and all the dishes will be displayed from which the users can decide to make a purchase.

The FoodCourt concept was first implemented by the FoodClub app. It works as follows,
> Certain restaurants that come under 10 kilometers of diameter works as a single FoodCourt. Likewise, with the same concept, multiple Virtual Food Courts are formed.

To place orders from multiple restaurants the users can choose the most favorable FoodCourt and all the restaurants/kitchen within that food court will be displayed to the users, letting them choose combos irrespective of restaurants. 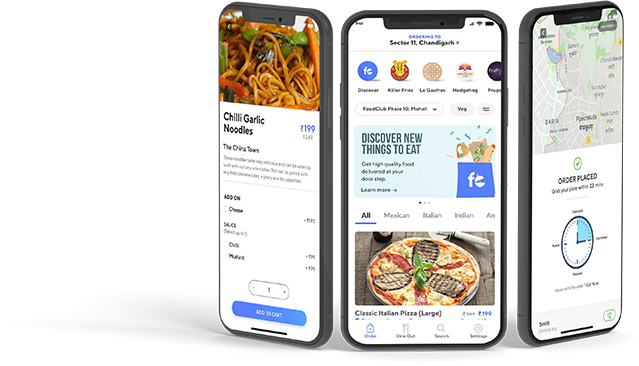 With a Smooth UI and advanced features, the FoodClub app makes it easy to help users search and decide on their Food Menu.

Following are some of the advanced features in FoodClub

This is a switch that the app users can use just to filter out the vegetarian and non-vegetarian dishes.

As part of the customer retention program, FoodClub has Loyalty programs implemented within its app. The users are provided with discounts and promo codes that can be applied while placing orders.

With an option to sort the dishes in respective of the price, the users can discover food items that are of the budget

Considering that the cart abandonment rates are high at the checkout page, the FoodClub app has made the checkout process simple by implementing multiple payment gateways. This feature lets the user’s checkout hassle-free and quickly.Most popular checkout methods such as PayTM, UPI, Debit/Credit Card, and COD are applicable in the App.

Two main sources of revenue for foodClub app is

As a delivery partner of restaurants, the foodClub collects commissions for every order that is placed from the restaurants.

For orders placed form distant foodcourts and for orders under a certain price, the users will be charged a nominal food delivery charge 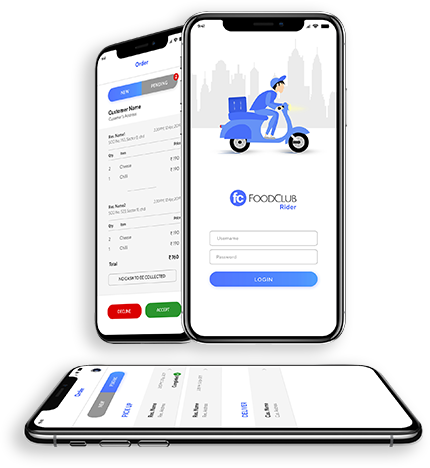 Bringing with the right plans and methods have given FoodClub the right amount of exposure, The team has taken care to run numerous experiments during the beta form. This has led the startup to stand up and compete with the top tier food delivery services.

Instead of venturing the existing food delivery methods, the food club took a big leap in implementing innovative ideas that are most demanded by the food lovers. The route map followed by FoodClub is a good example for startups looking to build their empire.